Stepping in with a special bonus contest! (Likely a one-off)
Some of you may know I've been playing Bomber Crew with a Crew designed around our wonderful community, so I decided I wanted to get that community even more involved!

Premise: The objective is to create a decal for the SGXPAirventures Bomber!
1. The custom decal's within the game can be 64x64, translating to entries being within 64x64 pixels,
2. There's a limited palette, as Bomber Crew only allows certain colours to be used and as I'd rather not butcher someone's fine art while putting it in game, so stick to it please.
3. Decal's can be anything really, so long as it fits within 64x64 and uses the palette I don't care, the winner is down to people's votes.
4. To make things easier here's a template, with a 64x64 box, centralising X and the palette (plus a few examples you may have seen on the discord). 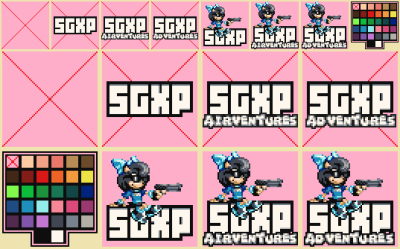 Additionally I've attached some screenshots of the current plane in-game, in case this helps inspire people, and so you can see where Decals are displayed.

Where do we post it?: I ask that final submissions be posted in this thread, attached as an image.

Deadline: Your entry must be submitted by Sunday, August 7th bu 11:59GMT.
Unfortunately I have plans on the 8th but will do my best to announce the end or delegate this task to someone else.

What happens next?: Once we reach the deadline then later entries will not be allowed, and a poll created to let people vote for their winner!
The vote will remain open for a week and at the end of that week we will have a winner!
Whether you participated or not, you can vote for anyone you'd like. The criteria for the winner is entirely up to you.

Yay I won!!! Wait, what's the prize?: If you are voted the winner, congratulations! I'll recreate your Decal in Bomber Crew and apply it to our wonderful "SGXPV" (or whatever plane we're on at that point), the design may also feature on the aircraft used in the SGXPA Aircrew special.

Remember, this can be whatever you want.
Want to make SGXP a proper roundel? Go for it.
Pin up girl style? Go ahead!
Dong? SURE! (plz not though)
Just fit within the requirements and have some fun!

The entry period has now ended the the voting has begun!

A burned down forest

To go along with the joke of putting Gardow on the wing and then throwing him off of the wing.

A pair of lion paw prints to mark his spot. Palette based on the Belgian Air Force roundel. Incidentally also the Jurassic Park logo palette.

Sayanotron can either save everyone or toast toast, I mean toast the engines

A small entry of my own with 2 wishes:
1. The Palette on the MontrOC I was given was acurate,
2. This thing doesn't win.

Thank you for attending my TED talk

A burned down forest

A second entry from moi

And a third because why not
D

Another day, another decal
D

Variation of the previous based on the RCAF Roundel
D

If I submit the most, I have the most chance of winning

Just wanted to do it for fun
Reactions: KaiTatanka and Dizakui
F

Its trash so I can live up to my reputation ( ͡° ͜ʖ ͡°)
Reactions: Xypter
D

Gotta get some sexy sexy pin ups up in here
D

AND THAT'S THE DEADLINE!

Unfortunately any entries following this post will not be included in the competition, but if you've got stuff to show please feel free to do so!

What happens now?: A poll should have been created (or soon will be) to allow you, the wonderful audience, to vote for your favourite entries!
This poll will be active until Friday, August 13th at 20:00GMT, at which point if I'm available I'll end the voting and tally the results!

What if there's a draw?: If there are 2 entries tied for the lead in votes, then both win! There's 3 spots for decals on the plane but most designs won't work for that 3rd space. So if 2 are tied one design will go on the wings and the other on the side of the plane body.
If there are 3 or more tied for the top spot then I'll make a decision myself between them, this isn't a democracy, this is a diztatorship.

Why the odd time?: My plan is that this time will let me open up Bomber Crew immediately after voting ends (hence the diztatorship), stream it through the SGXP discord channel and let those interested watch me re-create the winning design(s) in Bomber Crew, granting a view of the winning design ingame!
Following this my hope is to play at least one mission over the weekend (again streamed) to allow people to see our glorious winner(s) in action..

Thank you for all of our entrants! We hope this was fun for people and provided something slightly different.
I'll try and keep the poll as easy to understand but if there is any confusion then please let me know.

There were too many options to add a Poll to the thread, see Strawpoll for the poll:

Ever so slightly early but looking at the results I'm sure you can agree it won't make a difference at this stage. 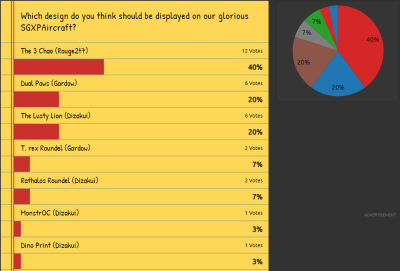