Surfin' here online,
Fighting everyone from afar,
You gotta first build up your giant robot thing!

1. Entries can be sprites, illustrations, 3D models, 3D printed, Paper mache idc as long as it follows the other rules;
1a. People are more than happy to use kit bashes for this, Storm Wave supposedly has a lot of good resources if this is your idea.
2. Design and create your own Mecha,
2a. As per the core of the contest is visuals, we're an art community, it's what we do,
2b. But still try to give your mech some specs (Size, weapons, armour etc.),
2c. Relating to the both, especially provide explanations for weapons and such, I love Gundam, but any Gundam fan will vouch that not all weapons are immediately obvious as to what they are/do,
3. Just to throw this in, Mech's can be any size/shape,
3a. Want something as big as EVA-01? Go for it. Wanna make a pilotable power armour? Feel free.
3b. I'm trying to mix mecha references here to emphasise it doesn't have to be a specific type of mech, just a mech. Gundam, Evangelion, Batman Ninja, Patlabor, Metal Slug, Pacific Rim, Battlefield 2142, MechWarrior, Warhammer, Full Metal Panic, Ultraman, Zoid, Super Sentai/Power Rangers, Transformers, whatever, it's just gotta be a mech (A pilotable combat robot).
4. Remember it says deadliest,
4a. Have fun with that

If there are any questions about any of this feel free to drop a message in here or on the discord,

Deadline: Your entry must be submitted by Friday, June 10thth by 23:59GMT,
An event has already been set up on the discord to help those of different time zones.

What happens next?: Once we reach the deadline then late entries will not be allowed, and a poll created to let people vote for their winner!
The vote will remain open for a weekend and at the end of that, we will have a winner!
Whether you participated or not, you can vote for anyone you'd like. The criteria for the winner is entirely up to you.

Yay I won!!! Wait, what's the prize?: If you are voted the winner, congratulations! You get to pick the next contest!
Not only this, but starting here the competition winner will have a medal added to their username until the next contest's voting period (gotta have those bragging rights right?)
And also! You and your entry will be added to the Hall of Fame for the rest of time! Woohoo! Or y'know until this place dies

Any questions then slide into the Discord and feel free to ask there.

it's the main walker of the Dircolan Empire, an alien race located in the Large Magellenic Cloud.
It's main armorment are it's twin artillary shock cannons meant to take out fortified target, but can be used to take out large gunships as well.

It's side-weapons are 3 anti-vehicle plasma cannons around it's side and a small anti-infrantry turret at the bottem front. While it's "head" can turn 45 degree angles around it's "hip".

It requires a crew of 4 at a minimum but can carry another 4 aditional crewmembers. 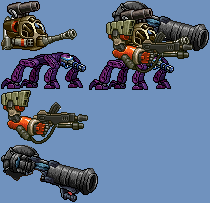 In a ravaged world we can always rely on one thing to remain,
The violence of man...
Picking up the remains of weapons from wars gone by, and throwing them together by any means the survivors created these scrappers to continue that violence.
With all care and maintenance out the window no one knows if these weapons even still work, but the sheer volume and size of them means most opponents choose not to find out.

So... Weapon list for this fun boi;
Top mounted short barrel 120mm Howitzer,
On the rear we have 2x heavy ordinance Over-The-Horizon Missiles,
On each side of the cockpit there is a 4 barrel missile pod, capable of firing surface-to-surface laser guided missiles,
At the front of the cockpit theres a 100mm barrel capable of firing... A 100mm Shell...
Below this we have a 5.56mm minigun, y'know for anti-infantry, don't wanna be overkill,
Moving onto the right arm the shoulder houses 2 pods capable of holding self-propelled fire-and-forget anti-armour missiles,
In the hand there is a 30mm machine gun with a changable 20 round magazine up top,
And mounted under this we have a napalm/flame thrower with the fuel latched onto the mech's "forearm",
And to finish it all off we have what-ever-the-fuck the cannon I used for the left arm is, lets call it a 914mm single use heavy mortar

Would all these weapons tear the thing to shreds? undoubtedly
Would it be deadly to literally anyone anywhere near it (including the operator?) absolutely

This concept came to me yesterday evening in the bathroom. I just polished off this image around half an hour ago - There's more I was doing with it, but there's not enough time in the day to sleep and also submit this with all the bells and whistles. Consequently, some of the features I am about to describe to you will have to be taken at my word.

This is Cyclonus Prime. The name is a many-layered reference, like an onion, or an ogre. Tails flies a plane named the Tornado. Tornadoes are cyclones. Optimus Prime's head looks like a Gundam. Cyclonus is a Decepticon. Decepticons are infamous for their air superiority. This mech transforms into a plane. Cyclonus Prime. There was a Jet Mode I was working on, but as previously described, not enough hours in the day. You'll unfortunately have to take my word that 85% of this design translates effectively to an aerodynamic vehicle and the scale remains more-or-less intact.

As for things you can see, right here and now, there are a number of armaments I can prove with visuals, though whether or not they're the deadliest is a matter of debate. I can assure you they're very flashy. The propeller engine is purely cosmetic (or rather, the giant gun on the chest transforms into a cosmetic propeller engine - work with me here, it's like 4 AM) - the actual engine is a highly compact matter/antimatter reaction assembly powering a warp drive which allows the vehicle to traverse cosmic distances by folding space. As the drive is stored in the lower torso, the entire upper body "propeller engine" assembly can be dedicated to "propelling" any detritus up to the radius of an average propeller engine assembly through bodies at relativistic speeds.

For reference, here's a fun graph to help illustrate what happens when you propel dust at someone at the speed of light or faster

I really don't know how the recoil on that would work out. Warp Drive is science fiction peanut butter, you just spread it all over everything until you can't see the plot holes and everything tastes like rich creamy peanut butter.

The shoulders are stacked with twelve AAWS-M fire-and-forget style missiles. This specific arrangement is an homage to the 1995 Laser Optimus Prime figure, a bizarre re-imagining of the autobot leader that depicted him as an oil tanker. The picture of him on the tanker is burning down a forest, seriously, go look at it, it's crazy.